The National Theatre informs you, with profound sadness, that early last morning (16 April 2021) after a prolonged illness, Mari Törőcsik -- Outstanding Artist and Artist of Merit, celebrated as both the Nation's Actress and the Nation's Artist, two-time winner of the Mari Jászai Prize, in addition to the Béla Balázs Prize and the Kossuth Grand Prize -- passed away at 86 years of age. She is a permanent member of the Company of Immortals. The  National Theatre regards Mari Törőcsik as our dearly departed. 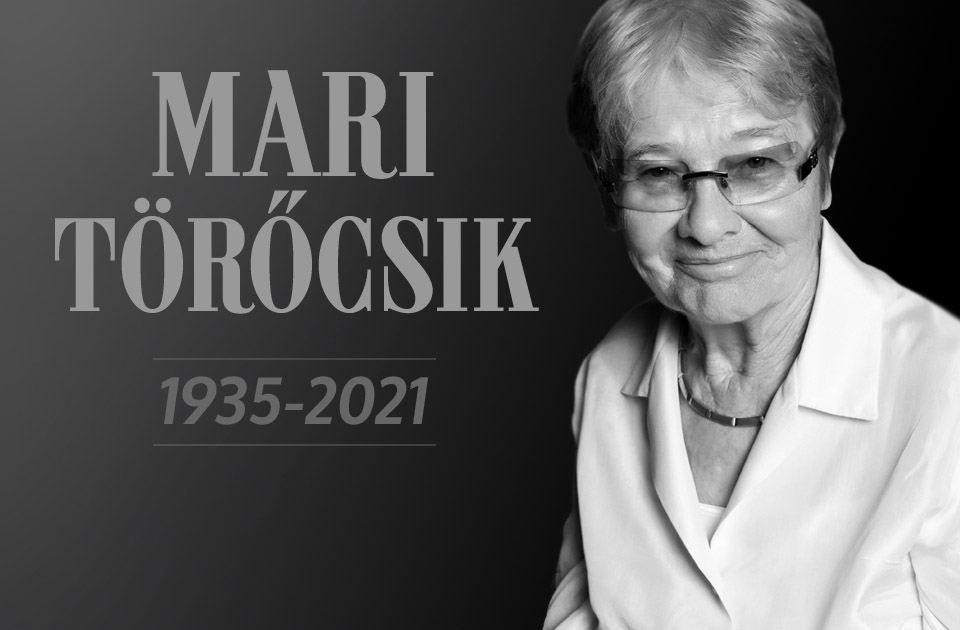 For Mari Törőcsik, theatre meant life. In 2009, when she returned from a state of clinical death, her old friend, the Russian director Anatoly Vasiliev, “directed her back to life” in a production of Margeurite Duras’ Entire Days in the Trees in Kaposvár. Later, too, she was ill and many times weak; yet, when she stepped onstage, we were astonished by the power, energy, and bearing she displayed through her character. Indeed, she blossomed and came to life, showing no trace of weakness. We marvelled at her and envied her. “In that fragile, ill body, where is the power she harnesses by stepping onstage?” She lived alone after the death of her husband, Gyula Maár. We know that she drew vital strength from the theatre. It gave her a task, a job to do.

Ever since 1956, when she exploded into the acting world as Marija in Merry-Go-Round, she performed non-stop. The numbers are staggering. Of her stage roles, 132 are preserved in the archive, and 66 of those were performed in productions at the National Theatre. She took the stage for the last time in Brecht’s Life of Galileo, which premiered in 2016. She had 174 film roles. The numbers, of course, only attest to the quantity, but it was the quality made this long career so valuable.

Her friend János Pilinszky, the poet, was among the first to recognise and put into words the secret of her incomparable talent. He wrote: “The vast majority of actors are artists that portray. They formulate a role. Mari Törőcsik is that rare exception. She doesn’t portray, she fuels a role, constantly stoking it with burning inspiration. The stage persona is not a ready-made outfit that she dons night after night. Moment to moment, before our eyes, she elevates the character from itself and its text in the stark, fiery, risky gestation of Creation. Sober and suggestive at once. This extreme and extraordinary contradiction only ingenious artists are able to bear and realise. An exceptional soul who is both no one’s and everyone’s… Mari Törőcsik – in an iconic scene – tears off a cheerful mask. What appears behind the mask is not just a smeared and crying little face; instead, it is something we can barely countenance. Mari Törőcsik’s face. The eternal, raw material that fuels her life, her roles, and her talent.”

The audience’s love gave her life. With appropriate modesty, she was proud of the love the public showered upon her. Besides the great performances, the talent, and the well-deserved honours, Mari Törőcsik was able to experience a completely singular success. She was the only individual to become world famous as an actor based in Hungary.

For more than three decades, Mari Törőcsik was a member of the National Theatre’s company – first, at the start of her career, from 1958 to 1979; then, once more, from 2002 on. She always proudly related how she was the first to be given a contract by General Manager György Schwajda for the newly re-opened National Theatre in 2002.

She performed in one of the most important productions of my life, playing the mother in Ferenc Juhasz’ The Boy Who Turned into a Stag both in the stage and later in the film version. An illustrious figure of Hungarian dramatic arts, she joined our still young company in Beregszáz, because only the work mattered. It was 2003 in Gyula on the castle stage. The sun blazed during rehearsal. The castle walls were like a cauldron, and the heat was unbearable. “Don’t spare me!” she shouted when I indicated to her that she did not have to sit through the whole practice, that it was enough just to come in for her scenes. With a wet handkerchief on her head, she watched the entire rehearsal, because she wanted to understand it as a whole. She was curious. She worked with us. Because there is work to be done, and without it, there is no performance.

In 2015, by putting Merry-Go-Round on the National Theatre’s program, we referenced Mari herself – the film, her career’s start, the initial and immediate international success. At the top of the show, we hear Mari Törőcsik’s voice for a moment, and then that of Imre Soós saying, “Let’s fly, Mari!” It was paying tribute, but also signalling the past that future generations connect with and become attached to.

Even so, Mari was part of the company, working among us! As a director, it gave me no peace. She had to be present in the performance. I decided she should enter at the end – no longer part of the performance, but the applause. My colleagues rattled off many arguments both for and against this. There was truth to all of them, and I, too, had my doubts.

The public dispelled those doubts. As soon as Mari Törőcsik entered at the end of the performance, the auditorium exploded. They celebrated her with a standing ovation. Because the strength of this individual touched their hearts. Here is someone we can love.

Whom a nation loves. Who is not a divisive, but a unifying figure. We are grateful to Mari Törőcsik for the many, many performances, all the splendid moments, the love, and her example, which taught us devotion to creative work and to the theatre. I am thankful not only that we could witness her and work with her, but that she was faithful to the National Theatre. We mourn this unique and irreplaceable member of Hungarian dramatic arts.

On behalf of the company of the National Theatre: 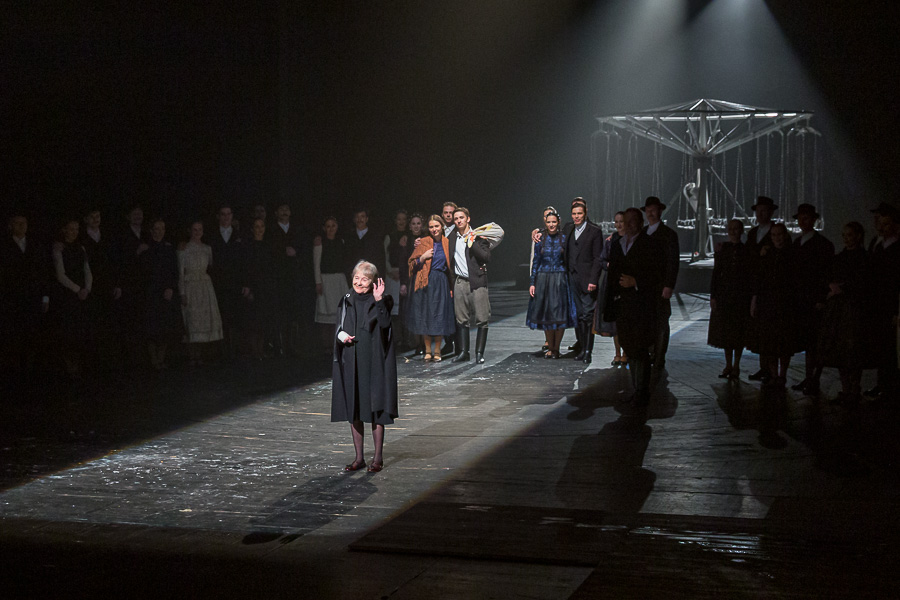 The Nation’s Actor, two-time Kossuth Prize winner, the Kossuth Grand Prize, two-time Mari Jászai Prize winner, the titles Outstanding Artist and Artist of Merit, and a permanent member of the Company of Immortals – to name only a couple of her dozens of distinctions. She acted in films, starting with Merry-Go-Round, made in 1955. In 1976, she won the best actress award at Cannes for her performance in the film Mrs Déry, Where Are You?, directed by her husband Gyula Maár. She won recognitions and life achievement awards at a number of national and international film festivals. She was an actress at the National Theatre between 1958 and 1979. For the1979/80 season, she acted and served as artistic director for the Kisfaludy Theatre in Győr (now the National Theatre of Győr). Starting in 1980, she was a member of MAFILM’s company for one decade. Beginning in 1990, she performed at the Szigligeti Theatre in Szolnok. Between 1993 and 1996, she ran the Budapest Art Theatre. She taught as an associate professor at Budapest’s College of Theatre and Film Arts. Since 2002, she was once again a member of the National Theatre.

In 2008, during a routine hospital examination, her blood circulation dropped, her heart stopped, and she fell into a coma. Yet, days later, almost miraculously, she regained to consciousness with her memory and physical motion intact. At the Hungarian Film Digest’s opening in 2009, she stated, “I come from quite far away. But I have returned!”

Permanent Member of the Company of the Immortals 1997

The Republic of Hungary’s Cross of Honour, 2 nd Order 1995

Blikk Magazine’s Artist of the Year 2010 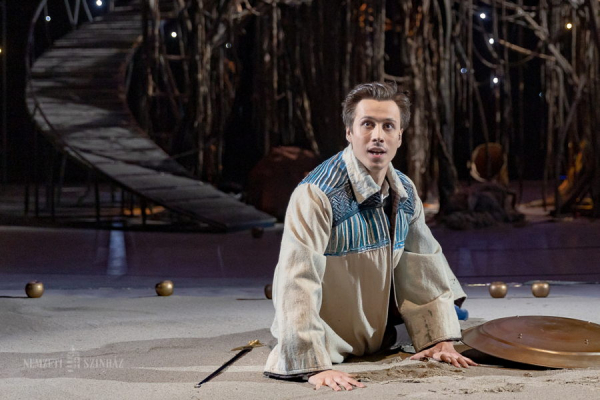 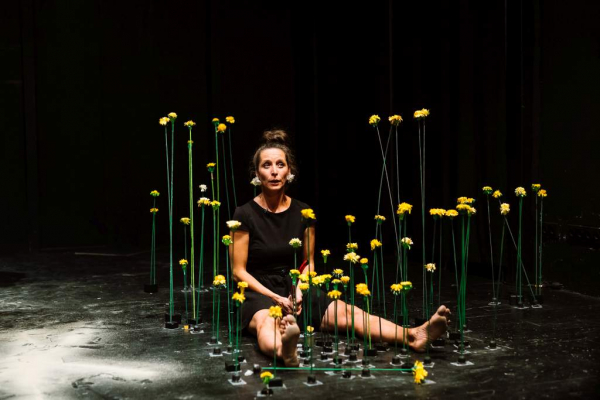 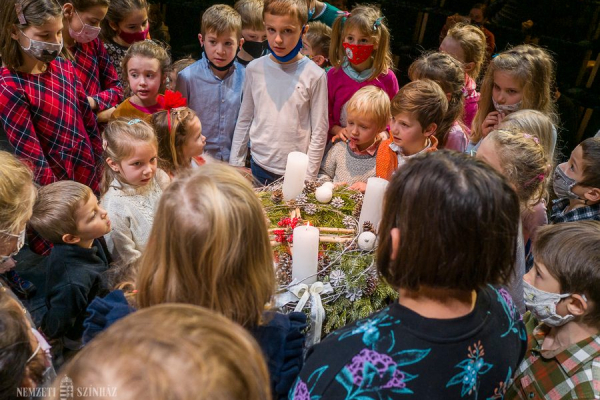